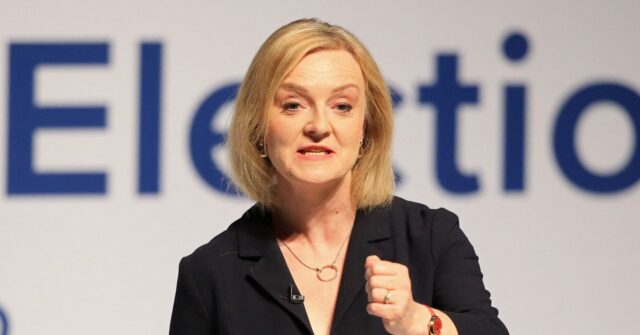 Tory leadership hopeful Liz Truss has claimed she would ensure officials “who didn’t do anything” about rape gangs are held to account.

“It seems at the moment that we live in a society where the police will happily turn up at your doorstep if you have the audacity to insult someone on Twitter and slap you in handcuffs, but if you’re part of a grooming gang they turn the other cheek,” a viewer question to the Foreign Secretary suggested when she appeared on GB News recently, asking what she was “prepared to do to confront and bring to justice the perpetrators of the grooming gangs?”

Law and order issues, including rape gangs, have been largely ignored by the candidates to succeed Boris Johnson and the establishment media organisations tasked with orchestrating the debates between them — indeed, an enquiry put to the then-five candidates asking if they would commission an enquiry into grooming in Oldham after it was blocked at the local level by Labour in July was ignored.

Confronted with the issue directly on GB News, however, Foreign Secretary Truss talked tough, saying that it was “absolutely right that the police should not be spending their time policing Twitter” and branding grooming gangs “absolutely repulsive”.

“Of course those criminals need to be brought to justice but, more than that, I want the people held to account — the council officers, the councillors and the police who didn’t do anything about it,” she said.

“Even, not just turned a blind eye, but actually condoned this behaviour. They need to be held to account because, until those people understand that their role in this was enabling those appalling crimes to be committed I don’t believe we will fully deal with that.

“I will make sure that those people are gone after by the relevant authorities.”

Her comments come as the Independent Office for Police Conduct (IOPC) dropped an investigation into three Greater Manchester Police (GMP) officers referred to them following a probe into grooming gangs failures.

Despite many admissions of general institutional failings, Breitbart London is not aware of any specific officer ever having faced prosecution or meaningful sanctions like loss of pension rights as a result of grooming gangs scandals, and the IOPC did not respond to a press enquiry asking whether they had “ever found fault with or recommended sanctions against specific officers”.

Police Told Mother of Rape Gang Victim, 12, That She Was ‘Prostituting Herself’ https://t.co/y4uf6DMIe7

Truss’s last remaining rival to become Conservative Party leader — and, by extension, Prime Minister, as the Tories command a majority in the House of Commons — Rishi Sunak, has also claimed he would take action on grooming gangs after being pressed on the issue on GB News.

“[W]e all know the reason that people don’t focus on [grooming gangs, it’s because of political correctness,” he said, saying people were “scared of calling out the fact that there’s a particular group of people that are perpetuating these crimes” — himself avoiding explicitly stating that this “particular group” is composed predominantly of Muslim with South Asian, typically Pakistani roots who mainly target white girls.

Sunak did not talk about legally pursuing negligent officials and police officers, but said he would introduce new punishments for groomers, including a type of life sentence with “very limited options for parole”, and a new task force at the FBI-like National Crime Agency (NCA) focused on them.

Two of Dodge's most iconic "muscle" cars will soon lose their tone. Beginning in December 2023, the Dodge Charger and Challenger will no longer … END_OF_DOCUMENT_TOKEN_TO_BE_REPLACED

At 3 a.m. on Tuesday morning, a suspect reportedly shot at an individual sitting in a parked vehicle near the intersection of Faircrest and Hayes in … END_OF_DOCUMENT_TOKEN_TO_BE_REPLACED

The FBI continues to flail after its raid on Mar-a-Lago, ostensibly under the guise of protecting government records. On Monday evening, we learned … END_OF_DOCUMENT_TOKEN_TO_BE_REPLACED

The Biden administration has decided it won’t release any of the roughly $7 billion in U.S.-based … END_OF_DOCUMENT_TOKEN_TO_BE_REPLACED

Millions of migrants continue to cross the U.S. border, and while many of them are breaking the law … END_OF_DOCUMENT_TOKEN_TO_BE_REPLACED

Police officers aren’t exactly popular in this day and age. The left hates them for being authority … END_OF_DOCUMENT_TOKEN_TO_BE_REPLACED

Joe Biden has a long history of medical issues. Some of them were life-threatening. Some less … END_OF_DOCUMENT_TOKEN_TO_BE_REPLACED