On the occasion of Kirill’s November 20 birthday, Putin offered “heartfelt greetings” to the head of the Russian Orthodox Church thanking him for his loyal service.

“Accept my heartfelt congratulations on your birthday,” Putin wrote. “As pastor of the Russian Orthodox Church, you direct your efforts towards preserving traditional spiritual and moral values ​​in society, coordinating interreligious and interethnic relations, and improving cooperation between church and state.”

“Your wise pastoral word works to unite the people and support people in difficult times of adversity,” the Russian president said.

Kirill’s critics have censured the prelate for playing lapdog to the Russian president, with one observer likening him to “Cardinal Wolsey to Putin’s Henry VIII.” 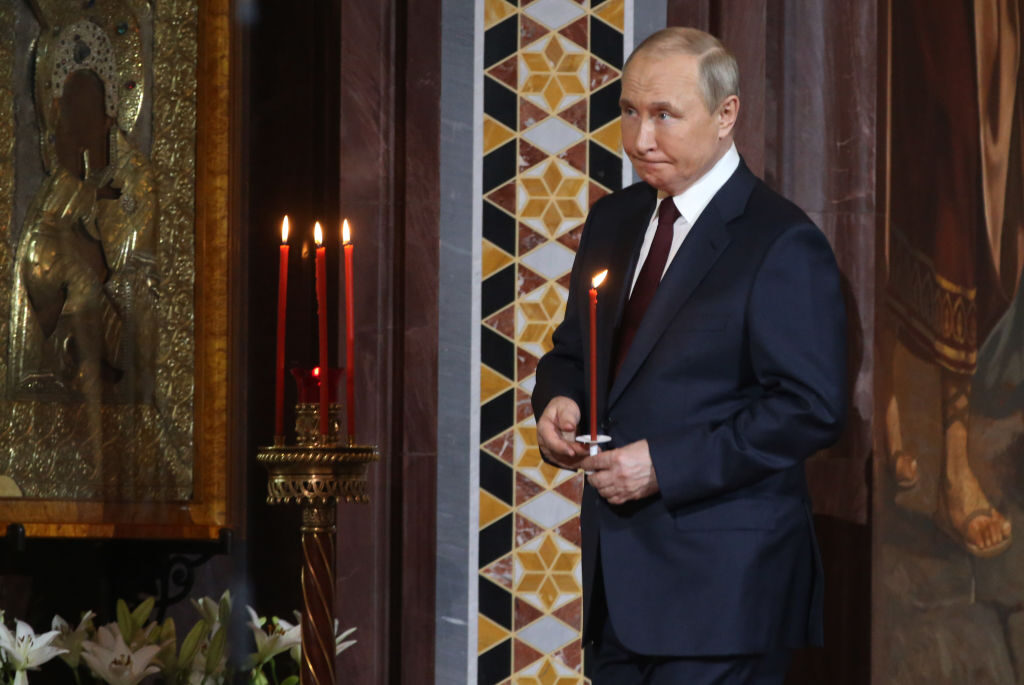 Russian President Vladimir Putin holds a candle during the Orthodox Easter mass led by Russian Orthodox Patriarch Kirill at the Christ The Saviour Cathedral on April 24, 2022 in Moscow, Russia. (Photo by Contributor/Getty Images)

Last May, Pope Francis criticized Kirill for his gung-ho support of Russian aggression, insisting that the patriarch was hurting rather than helping the situation in Ukraine.

“I spoke to Kirill for 40 minutes via zoom,” Francis told the Italian daily Corriere della Sera. “He spent the first twenty reading me all the justifications for the war from a notecard in his hand.”

“I listened and told him: I don’t understand anything about this. Brother, we are not state clerics, we cannot use the language of politics, but that of Jesus,” the pontiff said. “We are shepherds of the same holy people of God. For this we must seek ways of peace, to put an end to the firing of weapons.”

On Friday, CNN security analyst Juliette Kayyem suggested making 26 the minimum age to purchase an AR-15. Kayyem made her comments after being asked … END_OF_DOCUMENT_TOKEN_TO_BE_REPLACED

The Walt Disney Company was expecting big things from their latest animated movie "Strange World," the House of Mouse's first movie to feature an … END_OF_DOCUMENT_TOKEN_TO_BE_REPLACED

(The opinions expressed by contributors are their own and do not necessarily represent the views of RedState.com.) While it hasn’t received much press … END_OF_DOCUMENT_TOKEN_TO_BE_REPLACED

Quick-thinking cops in St. Petersburg, Florida, are being praised for preventing a potential “mass … END_OF_DOCUMENT_TOKEN_TO_BE_REPLACED

Most Americans are not personally worried about contracting coronavirus, a survey from The … END_OF_DOCUMENT_TOKEN_TO_BE_REPLACED

Nearly a quarter of Americans said they have not been vaccinated against the Chinese coronavirus, a … END_OF_DOCUMENT_TOKEN_TO_BE_REPLACED