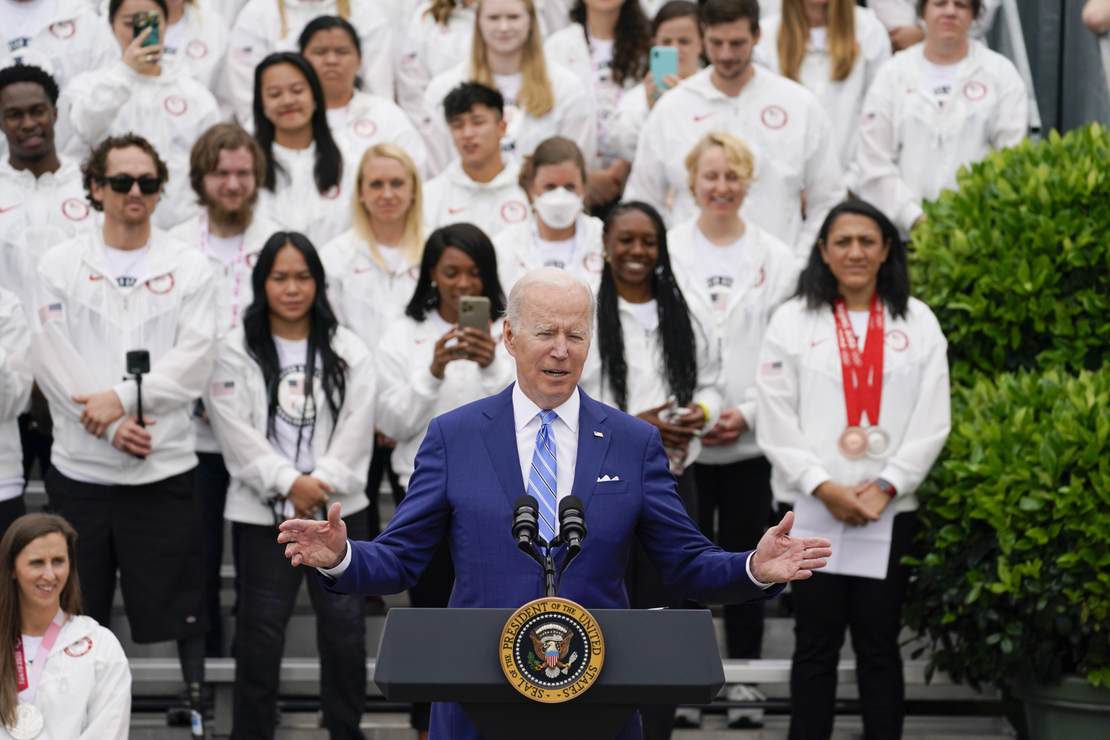 We’ve documented extensively at this site how whenever President Biden’s handlers let him out to play, cringe moments inevitably ensue, even at official family-friendly functions where one would think very little could go wrong (but usually does).

Unfortunately, that is exactly what happened during a White House event Wednesday in which Biden and Vice President Kamala Harris honored U.S. Olympic and Paralympic athletes.

The ceremony went smoothly enough at first, with Biden praising the athletes for toughing it out during the coronavirus pandemic when a lot of things including sporting events were put on hold:

President Joe Biden feted about 600 members of the U.S. Olympic and Paralympic teams from the Tokyo and Beijing Games in one of, if not the largest gathering of Team USA athletes at the White House on Wednesday.

“You’ve been through so darn much,” Biden said in a speech on the South Lawn, standing in front of the athletes and noting the coronavirus pandemic postponing the Summer Games by one year.

Biden, who attended the 2010 Vancouver Winter Games as vice president, said that his family’s favorite part of the most recent Olympics was watching the athletes’ families reactions.

“We learned about how big and diverse and talented, how great this nation is,” he said. “There’s no quit in America. You’re the quintessential example of that.”

But things got a bit awkward later on after Olympian Elana Meyers Taylor praised “wheelchair player Matt Scott” during a speech she gave to those in attendance. As Taylor moved in for a group photo, Joe Biden said “don’t jump” as the photo, which included other Olympic and Paralympic athletes including Scott and some of his fellow wheelchair Paralympians, was being taken.

Biden tells to Paralympic basketball players not to jump while taking pictures 🙄 pic.twitter.com/a3zzmSnQcp

The cringe moment was reminiscent of another one from March of this year when Biden joked to members of the 82nd Airborne Division that they shouldn’t “jump” from the second floor to the first floor, where he was giving his speech.

More infamously, there was the one involving Biden and a Missouri state senator when Biden was then-Democrat nominee Barack Obama’s vice-presidential nominee. Flashback to 2008:

At the start of his remarks, [Biden] pointed out several state lawmakers in the audience for praise. When he got to Chuck Graham, a state senator from Green Meadows, Biden urged the lawmaker to “stand up Chuck, let ’em see ya.”

But Graham, who is in a wheelchair, can’t stand up – a fact Biden quickly picked up on.

“God love ya, what am I talking about,” Biden said. “You can tell I’m new,” he quipped, asking the audience to stand up for Graham instead.

“I’m told Chuck Graham, state senator, is here. Stand up Chuck, let ’em see you. Oh, God love you. What am I talking about?”

As I’ve said before, it would be one thing if these flubs, gaffes, and awkward moments were one-offs – but they’re not.

The problem is that this is part of a long and troubling pattern, and the moments happen during pretty much every speech and public appearance he gives. Even more concerning than his inappropriate quips is him routinely forgetting the names of members of Congress, cabinet members, the names of world leaders, where he is, and the instances where he appears to point at thin air, etc.

None of this, I should point out again for the record, is normal, no matter how much the media, Democrats, and Never Trumpers paint these worrisome incidents as “just Joe being Joe.”

Joe “just being Joe” is very problematic, something that becomes more and more obvious every time he’s allowed out of the basement. Unfortunately his second in command is no better, and we’re stuck with them for at least the next two and a half years.

But hey, at least no more mean tweets, right? That’s the silver lining in all this, I guess.

The culture has rapidly changed, and that’s nowhere more evident than among college students. Case in point: A commencement speaker was recently booed … END_OF_DOCUMENT_TOKEN_TO_BE_REPLACED

The Gun Owners’ Action League (GOAL) is always doing some serious heavy lifting in the Commonwealth. GOAL constantly has the odds stacked against … END_OF_DOCUMENT_TOKEN_TO_BE_REPLACED

Almost every week, new incriminating evidence is mined from Hunter’s wild laptop. And the proof is mounting that President Joe Biden is lying about … END_OF_DOCUMENT_TOKEN_TO_BE_REPLACED

While testifying at a House Judiciary Committee hearing on Wednesday, Aimee Arrambide indicated that … END_OF_DOCUMENT_TOKEN_TO_BE_REPLACED

The JR-15 is little more than an AR-15 that is made a bit smaller for smaller shooters, namely kids. … END_OF_DOCUMENT_TOKEN_TO_BE_REPLACED