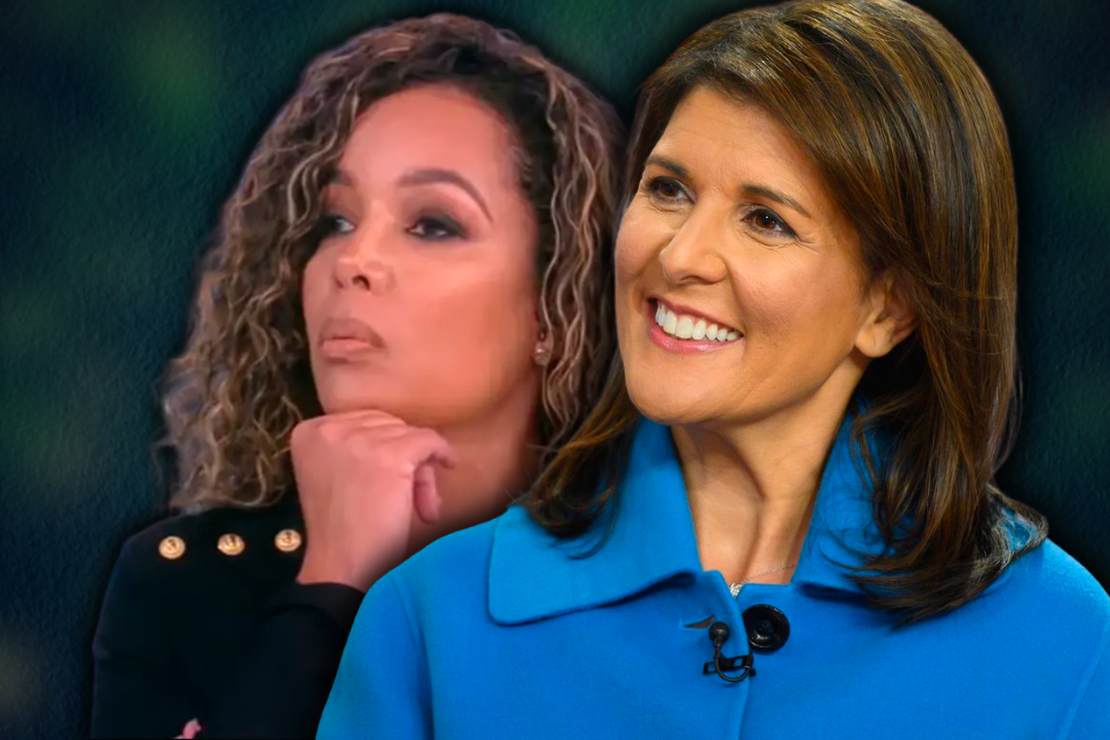 Nikki Haley calls out “racist” “Sunny Hostin” on Fox News, “Sunny is not her name. Nikki is my name. It is on my birth certificate.”
She says ABC News will not punish “Sunny” because “they let liberals say that about conservative Republican minorities all the time.” pic.twitter.com/UFuFs2RnwX

“Sunny” Hostin accused Haley of trying to hide her Indian heritage. “The View” panelists were speaking about a potential 2024 White House race.

“It’s not the first time, and it won’t be the last time that the hosts of ‘The View’ come after me or that liberals come after me in … whatever way. They can’t stand the fact that a minority female would be a conservative Republican.”

“You’re not going to see her fired from that show. We’re not even going to see an apology from that show because they let liberals say that about conservative Republican minorities all the time, but yet nothing is done. Had this been said about a Democrat, all hell would have broken loose.”

Haley pointed out that Hostin’s name is not “Sunny,” while Nikki is, in fact, the name on her own birth certificate. She said:

“Sunny is not her name. Nikki is my name. It is on my birth certificate. It is an Indian name, and I embrace my Indian heritage. I have written two books that describe the struggles that my family had, what it was like growing up.”

“When they go after something like your name or your looks, they don’t have anything else that shows your winning, and I’ll take that win all day long.”

Thanks for your concern @Sunny. It’s racist of you to judge my name.

Nikki is an Indian name and is on my birth certificate—and I’m proud of that.

What’s sad is the left’s hypocrisy towards conservative minorities.

By the way, last I checked Sunny isn’t your birth name… pic.twitter.com/NI3KZXjD6F

“I would love to see Nikki Haley … I think that Nikki Haley was an incredibly effective governor of South Carolina.”

Griffin could barely get a few words out before Hostin tried speaking over her and insulting Haley. Hostin said:

“What is her real name again? There is some of us that can be chameleons and decide not to embrace our ethnicity…”

She was then interrupted by another co-host, who said:

“Sunny, I don’t think that’s fair, you go by a different name.”

Finally promoting GOP women, Farah Griffin notes the possibility of Nikki Haley running in 2024 and how effective she was as governor.
But villainous race-baiter Sunny interrupts to chide: “What is her real name again?” And essentially calls Haley a race traitor. pic.twitter.com/QOCR3ty5Na

The left gets irritated when minorities have conservative values, vote for Republicans, and refuse to fall in line with the viewpoints touted by folks like Hostin. This is not the first time, and it likely will not be the last time, but people like Hostin and others must be called out because everybody should think for themselves; nobody should be forced to think the way others want them to.

Hostin later called California Governor Gavin Newsom “charismatic” and “smart,” … which tells you all you need to know about Hostin’s opinions.

As they were going to the commercial break, Sunny interrupted to praise her heartthrob Gavin Newsom. She calls him “fresh energy that we need, I think that he’s charismatic, I think that he’s smart … I’m not even going to talk about the good looks.” pic.twitter.com/aSDJhd92K0

The First Amendment exists for every American, not just those Hostin agrees with. It is important for society to be able to debate, discuss, and agree to disagree. But time after time, Hostin has disparaged those who disagree with her.

As I’ve said before, if one wanted to draw up an apt, disturbing portrait of what the rabid pits of the Democratic fever swamps actually look like on any given day, they wouldn’t find a more fitting example to work with than to flip their televisions on to ABC for another mind-numbing episode of “The View,” where self-loathing so-called progressives and Never Trumpers open their mouths on a daily basis and let the inevitable ignorance, stupidity, and hate-filled intolerance for differing viewpoints spew forth.

Tuesday was no different, except in this case the show’s most notoriously “woke” co-host, Sunny Hostin, finally got her just deserts in an unintentionally revealing segment where she showed viewers who she really is.

The topic under “discussion” was 2024 presidential contender possibilities, where names like Democratic California Gov. Gavin Newsom and failed 2018 Georgia Democratic gubernatorial nominee Stacey Abrams were lovingly floated. But when it came to talk of the GOP possibilities, former U.S. Ambassador to the U.N. Nikki Haley’s name was mentioned by co-host Alyssa Farah Griffin, and that’s when Hostin’s true self made an appearance.

At about the 14 second mark of the below clip, watch and listen as Hostin asks Griffin “what is her real name again?” referring to Haley.

When Griffin responded by telling Hostin that “a lot of people don’t go by their actual real names,” Hostin still pressed her on what it is. Griffin said she didn’t want to mispronounce it but she said it was an Indian name.

Hostin, for who everything has a racial component to it, then suggested that Haley should “lean into being someone of color” as though someone’s race should be a focal point in a presidential campaign over their actual stances on the issues.

Finally promoting GOP women, Farah Griffin notes the possibility of Nikki Haley running in 2024 and how effective she was as governor.
But villainous race-baiter Sunny interrupts to chide: “What is her real name again?” And essentially calls Haley a race traitor. pic.twitter.com/QOCR3ty5Na

Moments later after Hostin declared that Haley was “fake” because she wouldn’t “lean in” to her Indian heritage, Griffin fired back again, this time by pointing out that Haley had actually been using the name “Nikki” since she was a child and kept on using it presumably because she grew up in South Carolina and wanted to lessen the chances she’d be judged and discriminated against because of her heritage.

The woke Hostin still wouldn’t let her implied “sellout” point go, telling Griffin in so many words that privilege was behind those who could supposedly “decide” to be “chameleons” and “not embrace our authenticity.” It was then that co-host Sara Haines chimed in and absolutely busted Hostin, reminding her that not even Hostin herself uses her real name (her full name is Asunción Cummings Hostin). Hostin then insulted millions of Americans by suggesting that she started using “Sunny” because so many people are uneducated in this country and couldn’t pronounce it, though she admitted in a 2021 interview that her real motivation was to advance her career, noting that her “career took off” after she started using Sunny.

At that point co-host Whoopi Goldberg, who also does not go by her real name (Caryn Elaine Johnson), cut the segment and went to commercial, perhaps trying to rescue Hostin before she made an even bigger fool out of herself:

Alyssa finally grew a spine and confronted Sunny on the Haley smears.
Sunny calls the former Ambassador a racial “chameleon” who’s not “embracing” her “ethnicity.”
Sara Haines BLASTS Sunny: “You go by a different name!”
Sunny says Americans are too stupid to pronounce her name. pic.twitter.com/aQrmmjzplv

Haley, whose full name as it listed on her birth certificate is Nimrata Nikki Haley, responded accordingly:

Thanks for your concern @Sunny. It’s racist of you to judge my name.

Nikki is an Indian name and is on my birth certificate—and I’m proud of that.

What’s sad is the left’s hypocrisy towards conservative minorities.

By the way, last I checked Sunny isn’t your birth name… pic.twitter.com/NI3KZXjD6F

Hostin’s entire diatribe was not just identity politics at its absolute worst but it was also incredibly racist, judging a person based on their color and assuming they go by a certain name because they are ashamed of who they are and want to be accepted at all the cool parties.

Imagine for five seconds if a white conservative on another program had made a similar argument about Sunny Hostin or a Democratic member of Congress. Not only would they no longer have a job at this point but they’d probably have to delete their social media accounts and go into hiding.

As a side note to all this, this is what actual privilege looks like, though Hostin would never admit to it. Sunny Hostin can go on TV every day and spout off insanely racist remarks or at the very least racially offensive remarks, and The Usual Suspects don’t care. But if the shoe was on the other foot, the hammer would drop immediately. In fact, the hammer has dropped on many a conservative for saying something that wasn’t even racist but was perceived to be racist because it was a conservative saying it.

In summary, this is – sadly – what obsession with identity politics does to people. It turns them into bitter human beings who are incapable of viewing anything outside the prism of race or sex or whatever. You lose sight of who people are because your sole focus is in their physical characteristics and cultural background over the sum total of the person.

Outside of countering the woke B.S. whenever it makes itself known, one just has to pray that people who think this way will one day see the light because it’s an awfully miserable, lonely place to be.

To this point, the US Senate race in Pennsylvania has taken top billing in election-related discussions. Republican Mehmet Oz had closed the gap with … END_OF_DOCUMENT_TOKEN_TO_BE_REPLACED

Given the current political realities in the United States and Canada, this report should surprise no sane person paying a modicum of attention to the … END_OF_DOCUMENT_TOKEN_TO_BE_REPLACED

Tiffany Smiley is running for Patty Murray’s Senate seat in the state of Washington. The polls have tightened with Smiley within striking distance, … END_OF_DOCUMENT_TOKEN_TO_BE_REPLACED

The race for the U.S. Senate seat in Pennsylvania is closer than most folks expected when Dr. Mehmet Oz scraped through a bruising and bitter primary … END_OF_DOCUMENT_TOKEN_TO_BE_REPLACED

It’s one thing to make adjustments for trans athletes, then there’s altering common sense on their … END_OF_DOCUMENT_TOKEN_TO_BE_REPLACED

I’ve said it before and I’ll say it again: Kari Lake is really, really good at this. The Republican … END_OF_DOCUMENT_TOKEN_TO_BE_REPLACED

Who knew? It appears that all is not well in the LGBT community. Despite the efforts of the Democrat … END_OF_DOCUMENT_TOKEN_TO_BE_REPLACED

A Texas judge can continue opening his court proceedings ceremony with a prayer, a divided U.S. … END_OF_DOCUMENT_TOKEN_TO_BE_REPLACED

“Saturday Night Live” has struggled to be humorous over the past few years as they, like the other … END_OF_DOCUMENT_TOKEN_TO_BE_REPLACED