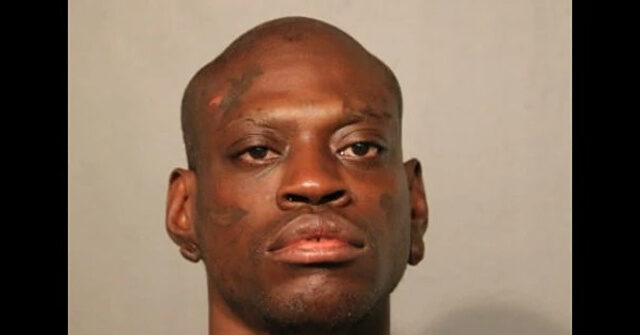 A convicted sex offender is accused of attempting to kidnap a woman and committing aggravated battery against two other women in Chicago on Sunday morning, according to police.

Less than 24 hours before the alleged attacks occurred, the suspect was released by a judge on his own recognizance after failing to register as a sex offender.

Chicago police identified Quavon Ewing, 32, as the man who attempted to grab a woman’s arm and pull her into a minivan he was driving on the 200 Block of S. Sangamon in Chicago’s West Loop neighborhood. The woman was able to escape.

In the latter case, Ewing allegedly poured a cup of his own urine on the 25-year-old victim’s head and then told the woman, “You deserve it,” according to prosecutors.

Ewing was arrested on Tuesday and charged with one felony count of attempted kidnapping and two felony counts of aggravated battery.

Before Sunday’s alleged crime spree, Ewing went to the police station to turn himself in on Friday for an outstanding misdemeanor battery case, according to CWB Chicago. However, when police ran his name, they discovered he had failed to register as a sex offender in Illinois from an incident that occurred in 2017.

The reason for the delay in registering was Ewing had been released from prison on September 2 after serving three years for sexual abuse and another two years for aggravated battery.

He had until September 5 to register as a sex offender but failed to do so.

On Saturday, Judge Maryam Ahamad voided Ewing’s outstanding misdemeanor arrest warrant, which was supposed to keep him in custody on a $1,500 bond. She also released Ewing on a recognizance bond for failing to register and ordered him to appear in court on Wednesday to resolve it.

However, instead of resolving his “failure to register” misdemeanor charge, the suspect appeared in front of Ahamad again, where she was not as lenient this time.

She ordered Ewing to be held on a $50,000 bail deposit for the kidnapping and battery charges and another $10,000 for the failure to register as a sex offender charge.

Major crime reported in Democrat-run Chicago is up by 37 percent since last year. While Windy City has seen a decrease in murder, shootings, and aggravated battery complaints, there has been an enormous surge in carjackings and thefts this year.

Fears are being raised in Illinois as cash bail for most crimes is set to be eliminated under the SAFE-T Act in January 2023. As Breitbart News reported, critics say that police stations and jails will become revolving doors for alleged criminals — such as Ewing — once the legislation is implemented.

A registered sex offender allegedly enticed a 12-year-old girl into sexual activity. The Rhode Island man attempted to orchestrate a murder-for-hire plot to eliminate her from testifying against him, according to the Department of Justice.

Chandler John Cardente, 28, allegedly attempted to lure a 12-year-old girl in December. Cardente and the child had reportedly been talking to each other on social media on Dec. 3, 2021, just seven days before he allegedly sexually abused the child, according to the indictment. Cardente posed as a 17-year-old, according to police.

“She went out to the soccer field, through the woods and to Cardente in his waiting vehicle on the side of Route 102,” said Burrillville Police Col. Stephen Lynch.

WRPI-TV reported, “The girl’s family reported her missing after she did not return home from school, according to Lynch.”

Burrillville police suspect that Cardente pulled over the car and forced the girl to exit after learning that authorities were in search of him relating to the missing minor. Approximately four hours after being picked up by Cardente, police said they later found the Burrillville Middle School student curled up on the side of the road in Warwick.

“We believe that Cardente kicked her out of the car around 9:30 p.m., so you’re looking at a minimum of seven hours [they were] together on Friday evening,” Lynch said.

Cardente was arrested in December 2021.

On Wednesday, a federal grand jury returned a three-count indictment charging Cardente with one count each of enticement of a minor, committing a felony offense involving a minor while being a registered sex offender, and use of interstate commerce facilities in the commission of murder-for-hire, according to United States Attorney Zachary A. Cunha and Rhode Island Attorney General Peter F. Neronha.

In February, Cardente made a phone call while he was being detained at one of the Department of Corrections Adult Correctional Institutions (ACI). WRPI-TV reported that Cardente unknowingly called an “undercover Rhode Island State Police detective, during which he reportedly said: ‘I got a 12-year-old witness, and she needs to end up dead … you’re okay with that?'”

“She’s a witness, she needs to go. I don’t care how she does it,” Cardente said, according to the affidavit.

The detective allegedly gave Cardente an opportunity to withdraw the murder-for-hire request, but the registered sex offender allegedly said, “I’m going to go to sleep at night so, I’m fine with it. I just need it done before I get indicted.”

The DOJ press release stated, “It is further alleged in the indictment that, while being held at the Adult Correctional Institutions, Cardente communicated by telephone with another person. During these communications, Cardente expressed his intent that the victim be murdered, and offered $200 in cash and equipment worth $1,500.”

Law & Crime reported, “Cardente was convicted in July 2014 on one count of first-degree child molestation ae was subsequently convicted of sex offender registration violations in February and June of 2019, as well as in September and November of 2020.”

Cardente is registered as a Level 3 sex offender in Rhode Island, Lynch said.

Former President Donald Trump flashed his frustration with the Republican leadership on his Truth Social account yesterday, lashing out at McConnell’s … END_OF_DOCUMENT_TOKEN_TO_BE_REPLACED

Week 31 of Putin’s War, that projected 3-day romp through Ukraine is not starting off well. Just one day after annexing the Ukrainian oblasts of … END_OF_DOCUMENT_TOKEN_TO_BE_REPLACED

Once upon a time, back when “Saturday Night Live” was funny on a consistent basis in the late 1980s, … END_OF_DOCUMENT_TOKEN_TO_BE_REPLACED

Five men were arrested on June 17, 1972, while trying to bug the Democratic National Committee’s … END_OF_DOCUMENT_TOKEN_TO_BE_REPLACED