The Insider Advantage Poll has Laxalt up by nearly three points: 45.9 percent to 43 percent. Independent voters preferred Laxalt 55.1 percent to Masto’s 24.2 percent. While Masto continues to lean into her Mexican ancestry and continues to note she is the first Latina in the US Senate, Hispanic voters aren’t biting. Among non-white voters, mostly Latinos in Nevada Laxalt bested Masto again, 55.8 percent of the vote to Masto’s 36.7 percent.

Data For Progress has Laxalt leading by one point, 47 percent to 46 percent.

Over the last week, the last 4 polls show us LEADING @CortezMasto:

Our momentum to become the 51st Senate seat isn’t slowing down any time soon.

Join our movement at https://t.co/S2kAdmxgZk

On the left, local writers have covered a 17-person focus group to allege voter unfavorability toward Laxalt. The founder of the anti-gun group Mom’s Demand chose to share this article, which claims that the polling is against Adam Laxalt, on a day when three actual polls came out in his favor.

Polls show US Senate candidate Adam Laxalt is disliked by Nevada voters, and for good reason. He opposes abortion rights and gun safety. That’s why he lost the governor’s race in 2018. Now we need to make sure he loses in 2022.

The author of that article, who claims to be an Independent, also sent out a red alert on Twitter because the non-partisan split in polling reporting heavily favored Laxalt by 19 points.

Yeah, this is a red flag. If he is up 19 with indies, he’s ahead by nearly double digits overall. https://t.co/9sW1PU3Eln

No matter how you choose to look at it, Laxalt is leading with a steady trajectory. He very well may be the wild card in the contest to flip the US Senate. While Nevada may be a long way from D.C., I wouldn’t suggest counting the state out–or taking your eyes off Adam Laxalt.

“Catherine Cortez Masto has a responsibility to strongly oppose Biden’s nomination of Gigi Sohn to the FCC. Sohn is an anti-police radical who has publicly supported defunding the police and repeatedly promoted social media posts attacking law enforcement.”

The Fraternal Order of Police, which represents 33,000 officers across the nation, mirrors Laxalt’s position, publicly calling on Sen. Masto to vote against the nomination citing:

“…overwhelming and substantial concerns regarding her views and past history. Gigi B. Sohn’s social media, public policy stances, and employment history has indicated serious animus towards law enforcement officers and the rule of law.”

FOP has compiled an archive of rhetoric Sohn has published attacking law enforcement. FOP is just one of eleven law enforcement representative groups that have endorsed Trump-backed Adam Laxalt, after previously endorsing Sen. Masto in her 2016 Senate race.

Here are 13 reasons why Nevada voters do not trust @CortezMasto and why Nevada law enforcement has endorsed me.https://t.co/wOnsUBL7mP

Masto continues to tout the remainder of her law enforcement endorsements in her heated re-election race, ignoring that she has fallen out of favor with many police groups as she stumbles in the polls. Recent polling from Emerson College shows Laxalt pulling ahead of the incumbent by one point. Last week, NBC called Masto “the most endangered Democratic incumbent this cycle” and Laxalt a “serious threat” to Masto’s re-election, noting the outsized impact COVID policies had on Nevada. Both Laxalt and Masto have previously served as Nevada’s Attorney General.

Sohn’s proposed role in the FCC may have much to do with her beliefs that law enforcement spies on civil rights leaders in public places. Breitbart reported on a July 5, 2020, podcast hosted by Sohn where she hosted a Color of Change senior campaign manager. Color of Change is a racial justice group that advocates to “defund the police” and against cash bail. The organization is backed by Democracy Alliance, a shadow group of invite-only leftist elite donors that interject hundreds of millions of dollars into elections and progressive organizations. George Soros is an original member of Democracy Alliance.

Biden’s nomination of Sohn as the fifth member of the FCC commission’s 2-2 split board has grown stale as she was initially proposed for the position over a year ago. The Hill reports the board has operated in a four-member capacity successfully for 25 percent of its existence. To push the controversial nomination through would have more to do with politics than policy, based on a fear that the razor-thin margin in the US Senate may be lost in the midterm elections.

In Nevada, refusal to back law enforcement has been a recent point of contention after the embattled Democrat Governor, Steve Sisolak, ignored the Las Vegas Metropolitan Police Department’s role in solving the homicide of local investigative journalist, Jeff German, following the arrest of Democrat sitting public official Robert Telles. To be mum on law enforcement’s efforts is perceived as a political move due to the Republican nominee for Governor being the current Clark County Sheriff, Joe Lombardo and also a means to downplay Sisolak’s appointment of accused murderer Telles to a state board. In one week’s time, Nevada saw two murder arrests of a current and former public official after an ex-deputy Attorney General was implicated in a 50-year-old cold case regarding the vicious slaying of a teen in Hawaii. 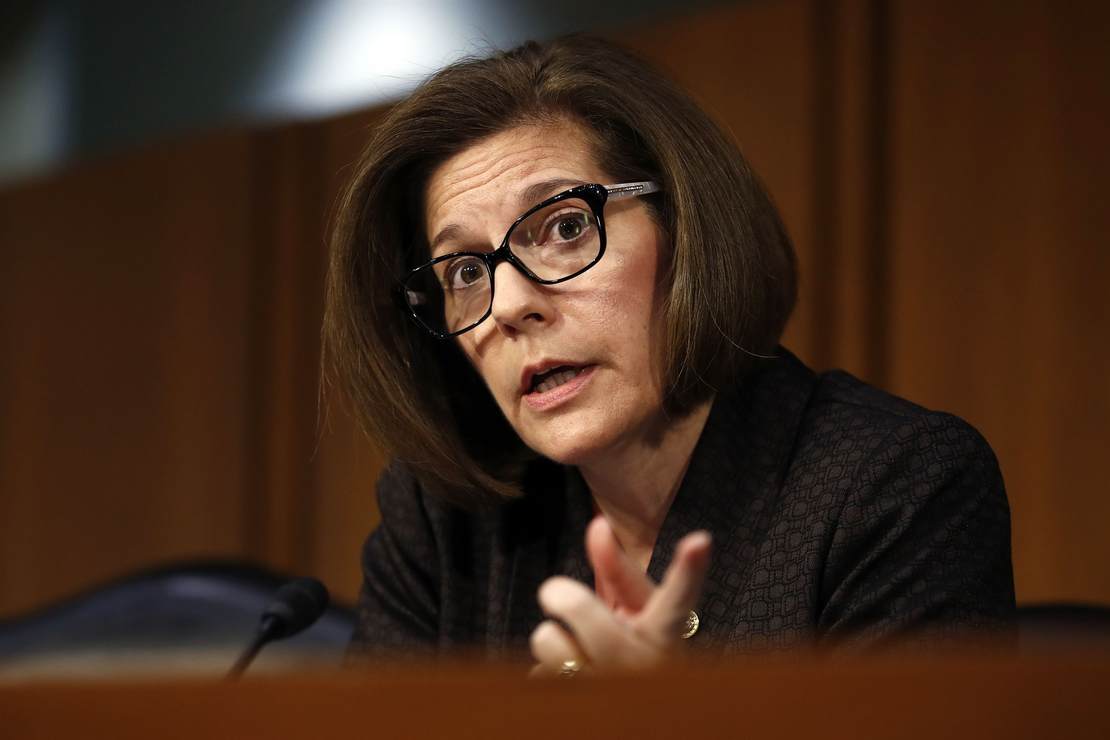 Senator Catherine Cortez Masto took over a Senate seat in Nevada that used to belong to the hate Harry Reid. Reid, who commanded a lot of influence in the state, was a force to be reckoned with. But, ahead of the 2022 midterms, Reid’s former seat could land in the hand of Republicans.

Adam Laxalt is the Republican challenger in the race against Cortez Masto, and despite her incumbency, she has not been able to escape the margin of error in all the recent polling. There are signs, even, that Cortez Masto is looking to rally her own forces and try to squeak by in November. Given that the polling data showing advantages for Democrats might be a mirage, according to the New York Times, the polling may actually be worse news for the incumbent Democrat than she might think.

After months of significantly outspending Laxalt, the two remain within the margin of error.

NBC News is reporting that Laxalt’s strategy – focusing on economic pain more than any other issue – may be working, and that Cortez Masto might very well be on the ropes.

Cortez Masto may be the most endangered Democratic incumbent in this cycle, even though her party hasn’t lost a Senate race here in a decade. While Democrats still project confidence, polls show a dead heat despite massive spending by Cortez Masto and an early assault of negative ads designed to tarnish rival Adam Laxalt.

“This is definitely our best opportunity at any point in the last 14 years,” said Jeremy Hughes, a Republican consultant who has worked on many Nevada races.

Hughes cited GOP gains in voter registration, a trend of Hispanic voters drifting away from Democrats and rising prices of gas and food as the key forces propelling Republicans.

And… yeah. The Hispanic trend away from the Democrats is something we’ve been tracking a lot here at RedState, but the economic pain hitting every voter could well be the bigger threat, and one that Laxalt is taking advantage of.

In a fit of desperation, Cortez Masto started verbally attacking crisis pregnancy centers in the usual disgusting smear, which is a sign that she is having to rally her own troops rather than try to whittle away support from her GOP opponent.

As NBC News puts it, though, the economy is the issue of the moment for working class Americans.

No issue permeates this working class state like the economy, according to polling and interviews with stakeholders in both parties. Covid lockdowns had an outsized effect in this state, which relies heavily on service industry workers. While the economy is rebounding, working class voters are still hurting — the cost of housing remains high and employees complain of low wages. A recent bipartisan survey found that three-quarters of Nevada voters say the country is “headed in the wrong direction” and 65% are “very or somewhat worried” about their own financial situation.

“People are getting hammered with inflation and the cost of gas and food and housing,” said Ted Pappageorge, secretary-treasurer for the influential Culinary Union, which represents some 60,000 workers in Las Vegas and Reno — 60% of whom are Latino — working in the state’s service industry, including in casinos.

It’s telling that the media – between this NBC News piece and the Times piece referenced earlier – is throwing up warning flags for Democrats. Given that Democrats have been touting positive polling and various successes in Washington D.C., it appears that their pet issues are simply being drowned out by what is at best economic confusion. These are the issues that resonate most with voters because they are so close to home.

Control of the House of Representatives may be a forgone conclusion, but the Senate has been a toss-up from the start. First, the GOP was heavily-favored, then the Democrats seemed to be regaining their composure. But now, the warning signs are there, and it could mean we’re back to beyond red wave territory.

In a court filing on Tuesday morning, the Pacific Legal Group filed the first lawsuit against the Biden administration and its student loan … END_OF_DOCUMENT_TOKEN_TO_BE_REPLACED

In an update shared after Gays Against Groomers was permanently banned from using PayPal, the … END_OF_DOCUMENT_TOKEN_TO_BE_REPLACED

Apparently, Democrats have the power of gods and can halt major meteorological occurrences. Or, at … END_OF_DOCUMENT_TOKEN_TO_BE_REPLACED

President Joe Biden announced on August 24 that by executive action, he would wipe out a significant … END_OF_DOCUMENT_TOKEN_TO_BE_REPLACED

The new movie “Smile” is now out but while the movie is getting semi-decent reviews, the far more … END_OF_DOCUMENT_TOKEN_TO_BE_REPLACED

A would-be robber in Escambia County, Florida is behind bars and facing multiple charges after … END_OF_DOCUMENT_TOKEN_TO_BE_REPLACED