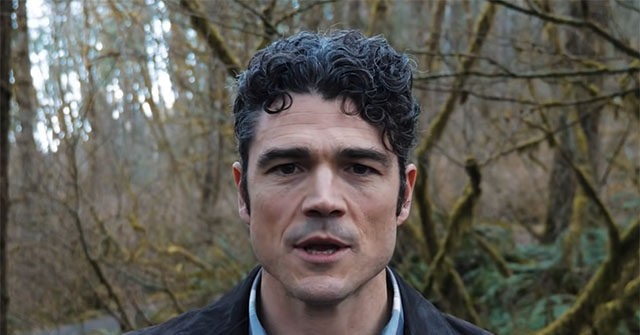 “After Trump’s house got raided, you saw a lot of the more establishment type of Republicans who said, ‘OK, this is it.’ … Hey, if that was their Road to Damascus moment, OK, that’s great. Let’s capitalize on that because it’s good that the establishment is waking up and finally realized that, ‘Hey, this isn’t 20 years ago when we’re just trying to get some corporate tax cuts done,” he said.

“We have huge systemic problems in our country that are actually going to require us to go on the offensive and potentially use the full scope of power that we have access to in Congress, you know, threaten with the budget, use the appropriations process, and really fight for the country,” he said.

He said if he is elected to Congress this November — a likely prospect given his district’s Republican-bent — he wants to have a congressional inquiry into the 2020 elections.

“I think we need to lay it out. Finally put the issue of ‘was there fraud in 2020’ to bed once and for all,” he said. “Let’s get back to voting in person. Something we could push for at the federal level is coming with a national standard for voter ID that indicates whether or not you’re a U.S. citizen. We have a national standard for ID to go buy a beer … . But yet our elections, it’s just like, well, we send out these ballots, it’s complete insanity.”

Kent said if elected he plans to work with Rep. Matt Gaetz (R-FL) and Troy Nehls (R-TX), who both endorsed him.

He said Rep. Marjorie Taylor Greene (R-GA) has also “done a great job” showing how to be effective while not being popular in Washington, D.C. “I might need to take a page out of her playbook here,” he said.

He cited Rep. Paul Gosar (R-AZ) as another model. “I’m talking to the folks on the Freedom Caucus. A lot of them have been really good, especially with policy issues,” he said.

He said he is excited about the incoming freshman class, which could include America First candidates John Gibbs (R-MI) and Max Miller (R-OH). “We’ve got some strong folks there and I think we’re going to have a powerful voice,” he said.

Kent also intends to advance an America First agenda, which to him means bringing manufacturing back home, not getting involved in needless foreign wars, and limiting immigration. He told Breitbart News:

It is on a national level, having a policy that brings back our manufacturing that basically takes everything that America is blessed with here naturally. Now, whether that’s energy, fossil fuels, or the timber industry here in the Pacific Northwest, that we’re blessed with here. We effectively use it and we use it to benefit our own people. Um, and as far as national defense goes, we stay out of [a] lot of allegiances and treaties that are not going to do us any good. We don’t go looking – and I’m looking – for more needless foreign wars. We have a very limited approach to immigration. We only bring in people into this country that are going to benefit the nation and not compete with American workers, and secure our Southern border.

You have a lot of traditional Republicans who are very deferential to Wall Street and very deferential to this notion of free trade or the free market, where they will say, ‘Hey, what’s good for the market is overall going to be good for the economy’, but that’s been a complete and total lie. As we shipped our manufacturing base overseas, we’ve seen the hollowing out of our middle class, of our working class. This is something that Trump did a really great job of explaining as a candidate, but then putting into practice, even though he was fighting tooth and nail putting it into practice as the president.

Kent said he also opposes the Biden administration’s purge of conservatives via a hunt for “extremism” and the military vaccine mandate.

“I think it’s all about purging people. And they started this with the extremist standdown, going through people’s profiles and saying like, ‘Hey, we disagree with your personal political beliefs about the last commander in chief,’ and starting to really target them.”

“It takes a lot of time to go through someone’s social media profile to see if they’re conservative or not, but it’s much, it’s much easier just to stick the vaccine in their face and say, ‘You take this or you get tossed out,’” he said.

“They just fought 20 years of war. Here’s the way [the Biden administration is] going to say thank you to them and take care of them: I’m going to call half of them, probably more than half of them, potential extremists. And then before the vaccine is even relatively tested, he forces the vaccine on the military,” he said.

Kent also wants to rein in the national security state and Big Tech.

“I want our intelligence community looking outward, protecting Americans, but the way that it’s just ran off the rails these last 10 years or so, where it’s become a pretorian guard for the left. I mean, we, we’ve got to reign that in. Otherwise we’re simply just not going to have a country anymore,” he said.

He believes the January 6th Committee should stay open and Republicans be appointed to it to press for answers.

“There was a riot. Got it. Let’s answer some really key questions. Let’s figure out exactly for once and for all, how many operatives, or agents — the federal government, the FBI, any other agency — how many did they have on the ground that day? I mean, because for me, there’s a lot of dots that just don’t connect.”

Kent said he’s glad there are competing social media platforms, but that the architecture of the Internet is still really controlled by a handful of technocrats.

“We have the tools to do it. And so I think now that, now is the time for us to take action before Big Tech just gets even more control. And that’s, to me, the digital vaccine passport, and the centralized digital cryptocurrency,” he said. “As the Biden administration attempts to crash the U.S. dollar completely, like we’re heading in this direction. So before it gets completely off the rails, I think we got to kind of break it up and treat it as a public utility.”

In the next few months before the election in November, Kent wants to reach out to those who did not vote for him to see if common ground can be reached.

“My goal is to really just unify the Republican movement, and then really go after independents and Democrats, because I think we can bring so many of them over to our side,” he said.

Not surprisingly, it appears that Democrats have learned absolutely nothing from their nasty attacks on concerned parents, as evidenced by a new ad … END_OF_DOCUMENT_TOKEN_TO_BE_REPLACED

My hunger for the sternest forms of justice is nearly insatiable these days. Even to the point of co-authoring a book calling for a new Nuremberg … END_OF_DOCUMENT_TOKEN_TO_BE_REPLACED

Ahead of the passage of the $700 billion Inflation Reduction Act, Ford Motor Company and General … END_OF_DOCUMENT_TOKEN_TO_BE_REPLACED

A marketing ploy for the new "She-Hulk: Attorney at Law" Marvel superhero series on Disney+ is … END_OF_DOCUMENT_TOKEN_TO_BE_REPLACED