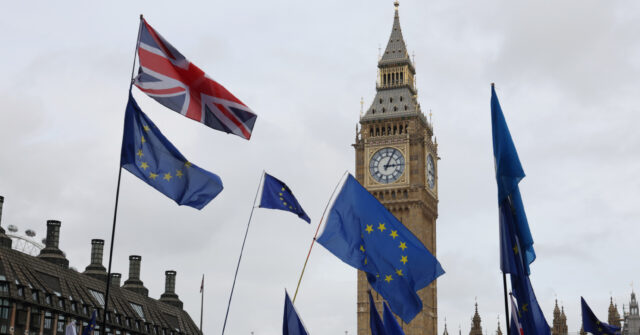 Swift backlash has followed claims senior British officials are considering pushing the United Kingdom back into the European Union’s orbit despite the Brexit vote.

Despite the British people having voted for Brexit all the way back in 2016, Rishi Sunak’s globalist-leaning British government is now considering the possibility of re-entering the European Union’s customs area, reports have claimed.

With many considering such a move as flying squarely in the face of the Brexit vote, some Conservative (Tory) Party bigwigs have vehemently denied the reports, despite them being largely in keeping with the British government’s consistent record of flip-flopping.

Backlash has been so swift — including the bane of the Tories, Nigel Farage, warning he’d return to politics if the party threatened to trash Brexit — that Prime Minister Rishi Sunak has now had to step in to state the alleged plan won’t happen.

A Downing Street spokesman claimed the reports of a move back towards Brussels that emerged over the weekend are “categorically untrue” — sort of.

This Govt spokes line (via @MrHarryCole) is not exactly a firm denial, I fear.

It does not disavow an arrangement based on alignment. It tries to suggest it by the reference to trade deals, but why not say so explicitly? https://t.co/AFzj3VsTVZ

Despite Sunak’s comments, Brexiteers mindful of the deep Europhilia still embedded within the permanent British bureaucracy, known as the Civil Service, remain concerned.

According to a weekend report by The Sunday Times, senior officials within the government are mulling the possibility of entering a so-called Swiss-style relationship with the EU, giving Britain access to the bloc’s customs union and relaxing controls on EU migration while allowing it to remain outside the political component of the bloc.

However, while such a move would leave the United Kingdom outside of the transnational bloc on paper, the country would certainly find itself locked in Brussels’ jaws again, which would likely once more have the final say on important decisions to do with the British economy and laws.

For example, as part of its arrangement with the EU, Switzerland must allow a certain amount of free travel between itself and EU member-states.

The Swiss must also make regular contributions to the EU budget, a significant red-line issue for major Brexiteers within the Tory Party.

Speaking on the claim that such a possibility was being considered, British Health Secretary Steve Barclay denied that such an arrangement was being looked at, instead saying that his government was committed to gaining economically through Brexit.

“I certainly don’t recognise that story,” Barclay reportedly said on Sunday, arguing that politicians instead were looking to use their newfound “regulatory autonomy” to build “massive opportunity” for the country.

The political editor of The Sunday Times, the weekend companion to the British newspaper of record, has defended the story, feeling motivated to say that: “The Sunday Times does not publish important stories like this unless they are impeccably sourced.”

Indeed, many do not seem to be convinced by the health tsar’s defence, given his party has been at the centre of a multitude of U-turn scandals over the last number of months.

One individual who appears to believe that the report of the coming Brexit flip-flop is legitimate is Nigel Farage, who noted the global connections of multi-millionaire prime minister Rishi Sunak.

“Rishi Sunak is a Goldman Sachs globalist, so this sellout of Brexit is not surprising,” Farage wrote on Twitter, before telling his 1.7 million followers that “the Tories must be crushed”.

Hardcore Remainers have meanwhile relished in the news, with a number demanding that full freedom of movement with the transnational bloc be restored along with any financial agreements.

“We welcome news that Rishi Sunak is considering a Swiss-style agreement with the EU,” a post from the UK branch of pan-European party Volt on the topic reads, while describing the current arrangement that Switzerland has with the EU as not going far enough.

It has long been speculated that Gavin Newsom, an ultra-progressive politician who survived a recall effort in his state after dissatisfaction with … END_OF_DOCUMENT_TOKEN_TO_BE_REPLACED

Did you know that freedom of speech is “nonsense?” That’s the word from CNN, which let a former CIA … END_OF_DOCUMENT_TOKEN_TO_BE_REPLACED

The Chinese media has, in recent years, opined plenty about the right to keep and bear arms. Well, … END_OF_DOCUMENT_TOKEN_TO_BE_REPLACED

With Democrats in complete control of Colorado government, any legislative response to the mass … END_OF_DOCUMENT_TOKEN_TO_BE_REPLACED