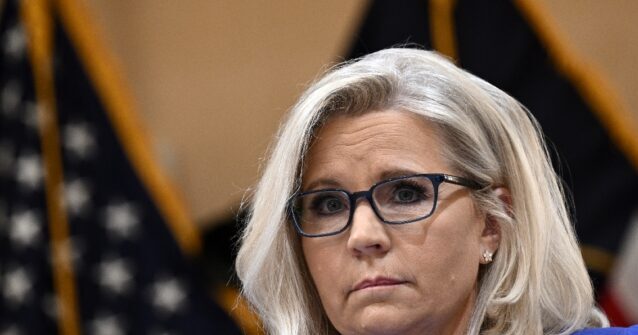 Cheney, who is up for reelection in the Republican primary on August 16 against Trump-endorsed Harriet Hageman, has allied herself with Democrats fighting former President Donald Trump. To maximize her opposition to Trump, she joined Pelosi’s partisan January 6 Committee, which has used its January 6 investigation to oppose the former president.

Polls show Cheney is losing to Hageman by 57 points among likely Republican voters and is predicted to lose.“The big story is Liz Cheney is going to get beat,” Brad Coker, managing director of the polling firm Mason-Dixon Polling & Strategy, stated about his polling data. “That’s a foregone conclusion.”

Cheney voted for the Bipartisan Safer Communities Act (S. 2938), which “is a package of different gun control proposals stitched together with school safety and mental health provisions,” the Heritage Foundation stated. Cheney voted on the 80 page bill just 72 hours after the legislative text was revealed. “Expecting members to understand the impacts of an 80-page bill in just 72 hours is irresponsible, not to mention the fact that it prevents the American people from weighing in on the package and having their voices heard.”

Cheney voted for The CHIPS Act (H.R. 4346), which said to make America less competitive with China than more competitive with $250 billion dollars of blended “corporate welfare with industrial policy,” the Heritage Foundation stated. “The bill includes $52 billion in financial incentives to the highly profitable semiconductor industry, $80 billion in increased funding to universities through the National Science Foundation (NSF), $10 billion for centrally planned regional technology hubs,’ and nearly $50 billion in funding for research at the Department of Energy.”

Cheney voted for the $1.5 Trillion Omnibus & Supplemental Package that spends $1.5 trillion on radical President Joe Biden’s policy initiatives “with an attached $13.6 billion for aid to Ukraine,” the Heritage Foundation calculated. “It fails to reverse the COVID-19 emergency or the Biden administration’s vaccine mandates, as conservative leaders have called for, and doubles down on the Green New Deal style government subsidies for green energy and climate policies.”

Cheney voted to create Pelosi’s partisan January 6 Committee. She was one of two Republicans to side with Pelosi, who appointed her vice chairwoman of the committee.

“Since January 6th, the courage of my party’s leaders has faded. But the threat to our Republic has not. On an almost daily basis, Donald Trump repeats the same statements that provoked violence before. His attacks on our Constitution are accelerating. Our responsibility is to confront these threats, not appease and deflect,” she said upon accepting the position.

Cheney voted to impeach Donald Trump with nine other Republican members in 2021. If Cheney loses her primary bid against Trump-endorsed Harriet Hageman on Tuesday, only two pro-impeachment Republicans would remain in Congress after taking the vote. Cheney’s defeat would solidify the 2021 impeachment vote as one of the most career-wrecking votes in congressional history.

A Georgia man called 911 to complain about getting cold fries from McDonald's on Friday. However, the man seems to have forgotten that he is a murder … END_OF_DOCUMENT_TOKEN_TO_BE_REPLACED

It’s only a week, but already there seems to be a ton of questions about the FBI raid against … END_OF_DOCUMENT_TOKEN_TO_BE_REPLACED

Let’s put ourselves in the shoes of the congressional Democrats for a moment. I know — but just for … END_OF_DOCUMENT_TOKEN_TO_BE_REPLACED

A man shot himself after crashing his car into a barricade near the U.S. Capitol building early … END_OF_DOCUMENT_TOKEN_TO_BE_REPLACED

Depending on who you ask, Donald Trump is either in the clear following the FBI raid on his Florida … END_OF_DOCUMENT_TOKEN_TO_BE_REPLACED