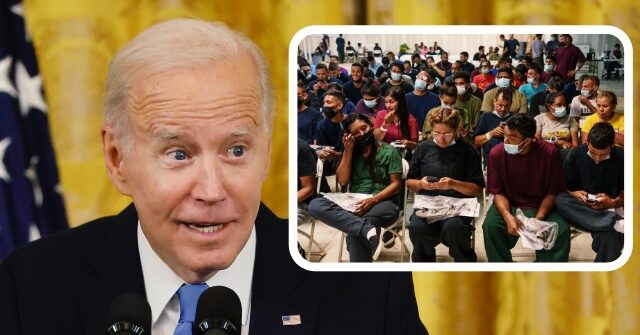 President Joe Biden celebrated mass immigration to the United States at the White House on Friday, saying the constant flow of millions of illegal and legal immigrants every couple of years is making America “so much better.”

During a speech for Hispanic Heritage Month, Biden celebrated that the U.S. foreign-born population has hit a record-breaking nearly 47 million and that 26 percent of students in American schools speak Spanish rather than English.

“When in American history has there been a circumstance where one ethnicity has the potential to have such a profound impact on the direction of a country?” Biden said.

“Twenty-six percent of every child who’s in school today speaks Spanish — 26 percent,” Biden continued. “We’ve had large waves of immigration before but the thing is, we just have so much opportunity to make this country so much better. I really mean it … so as my father would say ‘Let’s go get ’em.’”

The remarks come as Biden has spiked the number of foreign-born residents across a multitude of states and Democrats vow to add a million foreign-born voters to the nation’s voter rolls in the next four years.

Already, annually, the U.S. government rewards over a million foreign nationals with green cards and another more than a million with temporary work visas to take American jobs. In addition, under Biden, about 2.2 million illegal aliens have entered the U.S. interior.

The decades-long waves of mass immigration, bragged about by Biden, have been largely unpopular with American voters — particularly working and middle class Americans who are the most likely to compete for jobs, housing, and public services against new arrivals.

A YouGov poll from August revealed that a 35 percent plurality of American adults said current immigration levels are making the U.S. “worse off.

This month, another YouGov poll found that the majority of GOP voters now say current immigration levels are making the U.S. “worse off.” Similarly, an AP-NORC poll in May showed that nearly half of Republicans said Biden and Democrats are using mass immigration to import new voters and retain a permanent political majority in Washington, D.C.

The foreign-born population in the United States is currently projected to hit a record nearly 70 million by the year 2060 if current legal immigration levels go unreduced. https://t.co/9tvuRCnSNj

Research and the establishment media have consistently admitted that the larger a region’s foreign-born population, the more likely that region is to vote for Democrats over Republicans.

In 2019, for example, The Atlantic‘s Ronald Brownstein found that nearly 90 percent of House congressional districts with a foreign-born population above the national average are won by Democrats. This means every congressional district with a foreign-born population exceeding 15 percent has a 90 percent chance of electing Democrats and only a ten percent chance of electing a Republican.

The Washington Post, the New York Times, the Atlantic, Axios, the Los Angeles Times, and the Wall Street Journal have all admitted that rapid demographic changes spurred by mass immigration are tilting the nation toward a permanent Democrat political majority.

“The single biggest threat to Republicans’ long-term viability is demographics,” Axios acknowledged in 2019. “The numbers simply do not lie … there’s not a single demographic megatrend that favors Republicans.”

Already, the U.S. has the most generous immigration system in the world — expected to bring in 15 million new foreign-born voters by 2042. About eight million of those voters will have arrived entirely due to the process known as “chain migration,” whereby newly naturalized citizens can bring an unlimited number of foreign relatives to the U.S.

In the Arizona attorney general debate between Republican candidate Abe Hamadeh and Democrat Kris Mayes on Wednesday night, one of the moderator’s ethics was questioned, and both moderators saved all the hard-hitting questions for Hamadeh, leaving only softball questions for Mayes.

One of the debate’s two moderators, Stacey Barchenger of the Arizona Republic, failed to disclose that she works for the same news outlet that Democrat candidate Kris Mayes spent many years as a journalist.

In her opening statement, Mayes also made no mention of her lengthy career with the Arizona Republic, instead choosing to highlight her service on the Arizona Corporation Commission.

Later in the debate, Hamadeh pressed Barchenger for failing to disclose Mayes’ ties to the Arizona Republic.

“I want to make sure that you’ve done the viewers a disservice by not doing your journalist ethical duty by disclosing the fact that my opponent used to be a reporter at your paper,” Hamadeh told Barchenger. “And she was accused of insider trading when she was at the Arizona Republic, and you have not disclosed that.” 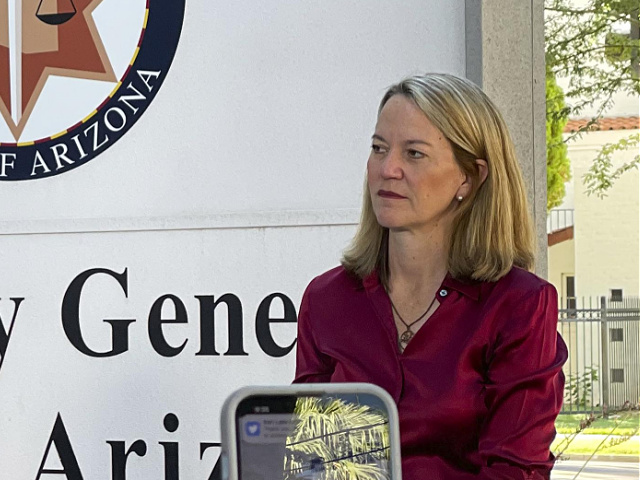 “So now it seems like I came to debate my opponent, I didn’t know it’d be debating all three of you,” Hamadeh added.

When the moderators asked the two to explain their qualifications to hold office, Hamadeh, a former Maricopa County prosecutor and U.S. Army intelligence officer, harped on Mayes’ lack of courtroom experience.

Although Mayes claimed her tenure as a judge on the Arizona Corporation Commission gave her experience with administrative law, Hamadeh noted that the position is an elected office that does not require a commissioner to have a law degree.

“I’ve been a prosecutor. I’ve actually had to deal with victims, I’ve put criminals away. But my opponent, she’s only been a professor of environmentalism and a former journalist,” Hamadeh said. “So I don’t think she has the legal experience that she’s trying to claim.”

Both moderators primarily focused their attention on Hamadeh throughout the debate, asking him at least seven questions about his views while paying little attention to Mayes’ views.

An overwhelming majority of the 27-minute debate focused on Hamadeh’s views on abortion and the 2020 presidential election.

On abortion, Hamadeh noted that the attorney general’s role is to enforce state laws rather than acting as a “super legislator.”

“I don’t want to make the law — that’s the job of the legislature. I enforce the law, and I think that’s an important distinction between my opponent and myself,” he continued. “I mean, she has said on record that she would not have enforced the 1977 law or 1901 law, or even the 15-week law, and I think it’s dangerous. I think people are electing us to actually uphold the law and not to be a super legislator.”

Hamadeh said Mayes would be “an activist general,” rather than an attorney general, using the office to advocate for her personal beliefs.

On the 2020 election, Mayes accused Hamadeh of spewing rhetoric that led to Arizona election officials being reportedly intimidated, harassed, and threatened.

The moderators continued their inquiry into Hamadeh, accusing him of helping his mother cast a ballot when he was a teenager, which led to a brief spat between Hamadeh and Barchenger.

“So now, it seems like I came to debate my opponent, I didn’t know it’d be debating all three of you,” Hamadeh said. “But I mean, I think it’s ridiculous to suggest that what I do at 15 is somehow going to affect me when I’m Attorney General.”

“I was not even 15 when Kris Mayes worked at the Arizona Republic,” Barchenger replied.

“Exactly why I’m debating with you again, Stacey. The Arizona Republic should disclose the fact that my opponent was a reporter at the Republic,” Hamadeh said. “She was even kicked off the campaign bus for John McCain’s run for president because of how dishonest John McCain thought she was as a journalist.”

Mayes noted that she used to be a Republican for three decades and highlighted how one of her proudest moments came when she was the second highest vote-getting candidate next to one of her “heroes,” former Sen. John McCain (R-AZ).

I spent 30 years as a Republican, just one year shy of the amount of time you’ve been alive on this earth. And John McCain supported me. And one of the things I’m proudest of is the fact that when John McCain — Sen. McCain, one of my heroes — was on the ballot, I was the second highest vote-getter, second only to him when we were running for statewide office.

After spending more than 17 minutes of the debate on Hamadeh’s positions on abortion and the 2020 election, the moderators briefly asked the candidates to address the ongoing fentanyl crisis.

Hamadeh pledged on day one in office to work with the Arizona legislature and governor to declare the Mexican cartels as terrorist organizations.

“So with that designation of the cartels as terrorists, there’ll be enhanced sentencing on them. So that’s exactly one of the issues I’m going to tackle at the border,” Hamadeh said. “But you know, my opponent, her top three issues she said are environmental justice, reproductive rights, and voting access. She said she has not been to the border.”

Jordan Dixon-Hamilton is a reporter for Breitbart News. Write to him at [email protected] or follow him on Twitter. 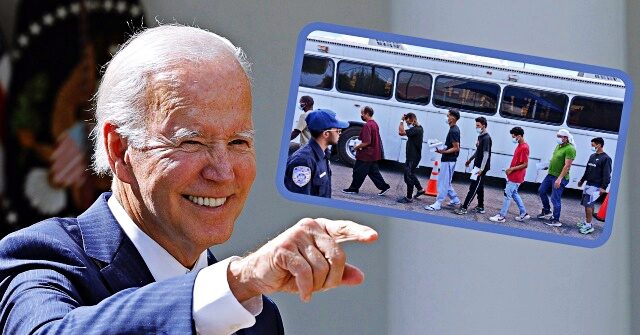 The analysis, conducted by the Center for Immigration Studies’ Andrew Arthur, reviewed the latest Customs and Border Protection (CBP) and Immigration and Customs Enforcement (ICE) agency data that shows almost 2.2 million border crossers and illegal aliens have entered American communities since Biden took office — including nearly 1.35 million who were directly released into the U.S. interior by Biden’s DHS.

“If wealthy cities like D.C., New York, and Chicago are struggling to deal with the 11,000 released migrants border governors have sent them in recent weeks, imagine what will happen when the rest of us get our fair share,” Arthur writes.

Biden’s Catch and Release network ensures that border crossers and illegal aliens arriving at the southern border are briefly detained before being released into the U.S. interior by way of buses and domestic commercial flights and can quickly secure work permits to take American jobs.

As Breitbart News exclusively reported, sources at DHS have said that they are currently acting as a “full-service travel agency” for border crossers and illegal aliens.

Arthur’s analysis comes as Biden’s DHS has refused since June to reveal the number of border crossers and illegal aliens the agency has released into the U.S. interior. The last total, from May, showed over a million releases since February 2021 — suggesting that DHS has released about 350,000 in the last three months.

Former President Donald Trump flashed his frustration with the Republican leadership on his Truth Social account yesterday, lashing out at McConnell’s … END_OF_DOCUMENT_TOKEN_TO_BE_REPLACED

Week 31 of Putin’s War, that projected 3-day romp through Ukraine is not starting off well. Just one day after annexing the Ukrainian oblasts of … END_OF_DOCUMENT_TOKEN_TO_BE_REPLACED

Once upon a time, back when “Saturday Night Live” was funny on a consistent basis in the late 1980s, … END_OF_DOCUMENT_TOKEN_TO_BE_REPLACED

Five men were arrested on June 17, 1972, while trying to bug the Democratic National Committee’s … END_OF_DOCUMENT_TOKEN_TO_BE_REPLACED