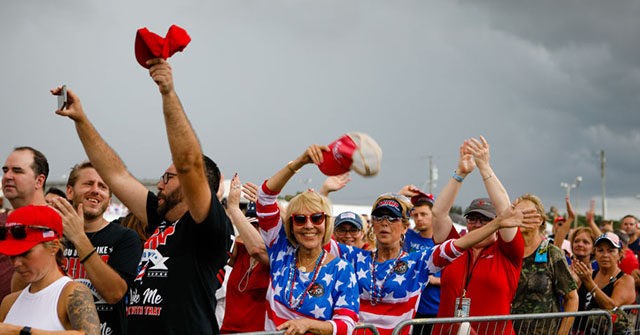 More than one million voters across 43 states have switched to the Republican Party in the past 12 months alone, ballot intentions compiled by the Associated Press (AP) shows.

A broad swathe of  regions in the country – big and small, urban and rural – report the same phenomenon.

Nowhere is the switch more visible, according to AP analysis, than in suburban counties stretching across Denver to Atlanta, Pittsburgh and Cleveland.

All the numbers bode ill for Democrats in a vote which will determine control of Congress and dozens of governorships.

House Democrats have such a bleak outlook for the upcoming midterms even districts Biden won by up to 15 points are in danger of flipping red, according to a report from Axios. https://t.co/ExK4tsfR0q

In all roughly two-thirds of the 1.7 million voters who changed their party affiliation shifted to the Republican Party. That amounts to more than one million people who became Republicans compared to about 630,000 who became Democrats.

A lack of direction by the Democratic Party is contributing to its slide. The AP report states:

Roughly four months before Election Day, Democrats have no clear strategy to address Biden’s weak popularity and voters’ overwhelming fear that the country is headed in the wrong direction with their party in charge. And while Republicans have offered few policy solutions of their own, the GOP has been working effectively to capitalize on the Democrats’ shortcomings.

“Biden and Democrats are woefully out of touch with the American people, and that’s why voters are flocking to the Republican Party in droves,” RNC Chair Ronna McDaniel told AP. She predicted that “American suburbs will trend red for cycles to come” because of “Biden’s gas hike, the open border crisis, baby formula shortage and rising crime.”

This is not the first time Democrats have been warned of a voting catastrophe awaiting in this year’s midterms.

As Breitbart News reported last month, the Democrats are “in shellacking territory.”

President Joe Biden is in no better personal territory.

The president is underwater on almost every key issue as the midterm elections loom closer, a Redfield & Wilton Strategies survey reported by Breitbart News reveals.

That gives him a net negative approval of -8 percent. Even so, that is still far better than his current RealClearPolitics spread, which sits at -15.1 as of last Monday.

Even as voters turn away from the Democrats and look on Biden with increasing disdain, AP reports the broad migration of more than one million voters, a small portion of the overall U.S. electorate, does not ensure widespread Republican success in the November midterm elections.

The details about party switchers however does present a dire warning for Democrats.

Put simply, the public isn’t buying what the Democratic Party is selling.

As Democrats panic over minority voters abandoning them, as demonstrated by the Latino voter turnout in the recent Texas election, one MSNBC analyst has come up with a simple way to force voters back into compliance: just “scare the hell out of them.”

Appearing on “Deadline: White House” with host Nicolle Wallace, Democratic pollster Cornell Belcher urged Democrats to scare minority voters by telling them they’ll lose all their rights if Republicans win in the midterms because America will have “no democracy.”

“Campaigns, we got to give them a reason to feel they have skin in the game, that this is important to them, that losing democracy is important to them. And whether or not it be telling women that, you know what, women? You think you’re losing your rights now? What do you think is going to happen if we don’t have democracy?” Belcher warned.

“And you know, African-American men who are showing the lowest motivation to turn out in this midterm, you think things are tough for you right now? Where do you think you’re going to stand in a country, in America where there’s no democracy, where they have absolutely no interest at all in respecting your rights?” he railed. “We’ve got to let these people understand they’ve got skin in this game, and we’ve got to scare the hell out of them because quite frankly, they should be afraid that we’re going to lose our democracy.”

On “The Rubin Report” this week, BlazeTV host Dave Rubin shared a video clip of Belcher’s rediculous voter strategy and discussed how Democrats are growing more desperate as they realize that minority voters are abandoning them.

To enjoy more honest conversations, free speech, and big ideas with Dave Rubin, subscribe to BlazeTV — the largest multi-platform network of voices who love America, defend the Constitution, and live the American dream.

Democratic strategist James Carville coined the phrase: “It’s the economy, stupid!” If that expression holds true, Democrats are in for a walloping this November.

That is because, as NBC News reported over the weekend, the voter demographic groups that helped Democrats win in 2020 are being most negatively impacted by the ongoing inflation crisis.

Inflation has been cited as a top concern by voters across the board, but economists and pollsters say it isn’t affecting all Americans in the same way. Those with lower incomes, Blacks and Hispanics, and those under 40, are being hit particularly hard given they tend to spend a greater share of their income on food, fuel and housing — areas that have seen some of the biggest price increases over the past year, surveys and polls show.

For Democrats, those demographic groups are the ones they need the most to turn out in November to hang on to power in Washington, or if nothing else, stem their losses.

The working and middle classes, of course, are most impacted by inflation — which decreases the purchasing power of every dollar — because they generally have less discretionary income, thus making them more susceptible to rising costs at the gas pump and grocery store.

Stephanie Lane, a mother of four from Pennsylvania, told NBC News just how bad the inflation crisis is for her family.

“The past few months, inflation really just pushed us over the edge,” she added.

Jeff Horwitt, a Democratic pollster, agreed the outlook is dim for Democrats.

“Particularly for voters that are critical to Democrats doing well in November — younger voters, African Americans, Hispanics — these are voters who are feeling more pain than other voters, and they’re looking for real solutions,” he told NBC News. “What’s been the through-line is economic concerns, and the Democrats have tried to address these concerns, but what voters are saying is that so far it isn’t good enough.”

A new I&I/TIPP poll showed Monday that a majority of American adults — 64% — believe President Joe Biden is “responsible” in some way for the inflation crisis.

With Biden’s approval ratings in the tank and Americans feeling pessimistic about the trajectory of the economy, Democrats will likely lose their majorities in Congress after the midterm elections.

Welcome back. Let’s do a roundup of what the situation looks like 128 days into Vladimir Putin’s 72-hour Special Military Operation against … END_OF_DOCUMENT_TOKEN_TO_BE_REPLACED

Does Joe Biden care about struggling Americans who are watching their paychecks disappear at the pump? On CNN, such a question was put to Biden … END_OF_DOCUMENT_TOKEN_TO_BE_REPLACED

With the overturning of Roe v. Wade and the nuking of the non-existent “constitutional right” to … END_OF_DOCUMENT_TOKEN_TO_BE_REPLACED

In our modern era, everything is political. Case in point: the Bank of Scotland’s Halifax bank. … END_OF_DOCUMENT_TOKEN_TO_BE_REPLACED