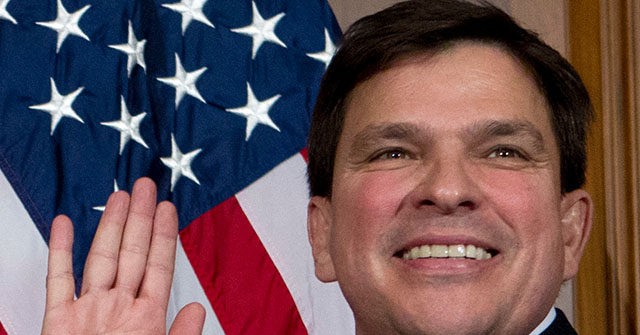 Vulnerable Democrat Rep. Vicente Gonzalez (D-TX) appears to have violated a federal conflict-of-interest law, known as the STOCK Act of 2012, by waiting almost a year to disclose a stock trade, according to Business Insider.

Business Insider reported that Gonzalez sold between $1,000 and $15,000 in stock of Freeport-McMoRan on July 24, 2021, but waited to report it until June 27 of this year, according to his most recent filed congressional financial disclosure.

This gives the appearance that he violated the STOCK Act.

Like every lawmaker, the congressman must submit a periodic transaction report with the clerk in the House of Representatives within 30 to 45 days of stock transactions over $1,000 made on behalf of themselves or their spouses under the  STOCK Act.

Freeport-McMoRan is a Phoenix-based mining company that operates seven open-pit copper mines in the United States and has other mining operations in Chile, Peru, and Indonesia, its website stated.

Interestingly, in recent months, Gonzalez has made mining an issue he’s appeared to be working on as a lawmaker.

In April, he introduced the “Rare Act,” which aimed to develop “a reliable domestic supply of critical minerals, rare earth elements and to uncouple our supply lines and dependence on China for national security manufacturing raw materials.”

In May, months after he sold his stock and months before he filed his most recent financial disclosure, he introduced legislation banning uranium imports from Russia.

“The U.S. has the resources and capacity to produce uranium here at home and should no longer rely on foreign dictators,” Gonzalez stated in a press release. “I urge our colleagues to support this legislation, stand in solidarity with Ukraine and unleash American energy!”

“Texans are struggling to get by, but Vicente Gonzalez sure isn’t as he pockets big checks, breaks federal conflict of interest laws, and tries to hide it from voters,” Congressional Leadership Fund Press Secretary Cally Perkins hammered in a statement. “Vicente is only ever looking out for himself, but Texans deserve a Congressman that will put them first.”

In 2012, Congress quickly passed the STOCK Act and signed it into law. It received substantial bipartisan support in both chambers. The legislation was introduced and promptly signed into law thanks to Breitbart News senior contributor Peter Schweizer, who in 2011 released Throw Them All Out, exposing corruption in the highest echelons of elected life.

Schweizer’s book, which exposed House Speaker Nancy Pelosi (D-CA) and many others, revealed corruption concerns among Republicans and Democrats on Capitol Hill, forcing Congress into adopting the STOCK Act that implemented stricter reporting and ethics requirements.

Additionally, Breitbart News exclusively reported in March 2021 that the congressman provided disclosure statements for 2017, 2018, and 2019 on holdings with the Bank of China — which fully acknowledges itself as a “wholly state-owned commercial bank” and has been since the mid-1990s — between $100,001 and $250,000. It also revealed that he was getting interest from the bank totaling between $2,501 and $5,000 each year.

Nonetheless, not only did the money with the Bank of China raise questions, but the amount of interest the congressman was receiving at the time did as well. Gonzalez reportedly had between $250,001 and $500,000 in at least two other banks, in which he received no interest in one and collected only between $201 and $1,000 in interest in the other.

At the time, Gonzalez refused to do any interview with Breitbart News after multiple requests, nor with his local news stations — which raised many questions about the congressman from his constituents.

Rep. Abigail Spanberger (D-VA) continues to flip-flop on President Joe Biden as his approval ratings have settled in the low 30s.

This week, when Spanberger was asked if she would campaign with Biden in her district — rated as a “Toss-up” — she said, “I intend to do the campaigning myself. I am the candidate. It’s my name on the ballot.”

In fact, the congresswoman even dodged the question of whether she would support Biden in 2024 if he runs for a second term.

However, given that she is a Democrat who has voted with Biden 100 percent of the time, Spanberger’s comments come as a surprise to some and could be an attempt to look more moderate and independent of Biden ahead of a tough primary.

The president recently saw the lowest approval rating of his presidency earlier this month. It dropped down to 32 percent with 57 percent expressing disapproval on the CIVIQS rolling job-approval average, which gave him a total net approval of negative 25.

Spanberger has criticized Biden’s political judgment in the past but has also welcomed the president to her district to discuss his far-left agenda in February.

Breitbart News reported in February that Spanberger welcomed him to her congressional district. In addition to tweeting out support for the president upon his arrival in her district, saying she was “glad to welcome [Biden] to Virginia’s Seventh District”:

I am glad to welcome @POTUS to Virginia’s Seventh District!

Today, we are talking about lowering prescription drug costs for Virginia families.

Let’s get it done. pic.twitter.com/OI0CW5mQZX

Before Biden took the stage, Spanberger said to the audience that she “wanted to welcome President Biden and his team” to her district. She added that she is “proud” to bring the president to her district. 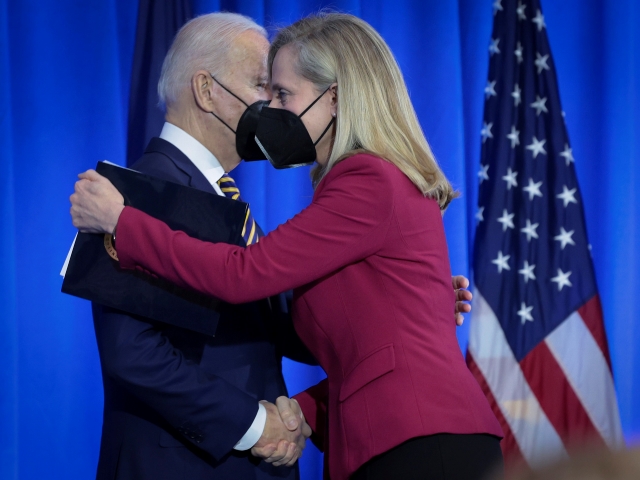 It appears the congresswoman has been unable to decide on a campaign tactic.

This came after last November when she expressed criticism of Biden, his administration, and his agenda. Her sudden reversal may have been a ploy to look more moderate since it happened after Republicans swept the state election, taking back the governorship, the lieutenant governorship, the attorney generalship, and the state House.

Additionally, in November, when the gas prices first started to increase across the country rapidly, Spanberger said during an interview that the responsibility ultimately falls on Biden and that she was “proud” to be among the members of Congress sounding the alarm on the issue of high gas prices.

During another interview, she also criticized the Afghanistan withdrawal that Biden botched, saying, “I think it was a disaster. I think it was chaotic.”

“I think it was really, really hard to watch, particularly for anyone who’s ever spent time in Afghanistan or spent years of their lives focused on kind of the future and the possibility that existed in Afghanistan,” she added.

Republican U.S. Rep. Adam Kinzinger (Ill.) called out the “Christian Taliban” in a Wednesday tweet, insisting there’s “no difference” between Republican U.S. Rep. Lauren Boebert (Colo.) being “tired” of the separation of church and state and what the real Taliban believes.

“I say this as a Christian,” Kinzinger added.


u201cThere is no difference between this and the Taliban. We must opposed the Christian Taliban. I say this as a Christian nn https://t.co/zt8mFKc3Jtu201d

The tweet from Kinzinger — a member of the House select committee investigating the Jan. 6 Capitol riot — links to an article by The Hill noting Boebert’s words to the Cornerstone Christian Center in Basalt, Colo., on Sunday: “I’m tired of this separation of church and state junk — that’s not in the Constitution.” She also said that “the church is supposed to direct the government,” The Hill added.

How are folks reacting to Kinzinger’s ‘Christian Taliban’ tweet?

While it appears the majority of reactions to Kinzinger’s tweet support his sentiments, a number of Twitter users hit back at him:

Others were just as annoyed:

Kinzinger appeared to double down on his perspective in at least one instance. Replying to the above Washington Times tweet, Kinzinger shot back: “It’s interesting. When the Taliban rose, we kept saying the ‘moderate Muslims’ need to speak out (I’m sure you did, too). I believe normal Christians need to call out Christian nationalism and the Christian Taliban. I can’t find anywhere [that] Jesus said that the [government] matters to him.”

Welcome back. Let’s do a roundup of what the situation looks like 128 days into Vladimir Putin’s 72-hour Special Military Operation against … END_OF_DOCUMENT_TOKEN_TO_BE_REPLACED

Does Joe Biden care about struggling Americans who are watching their paychecks disappear at the pump? On CNN, such a question was put to Biden … END_OF_DOCUMENT_TOKEN_TO_BE_REPLACED

With the overturning of Roe v. Wade and the nuking of the non-existent “constitutional right” to … END_OF_DOCUMENT_TOKEN_TO_BE_REPLACED

In our modern era, everything is political. Case in point: the Bank of Scotland’s Halifax bank. … END_OF_DOCUMENT_TOKEN_TO_BE_REPLACED